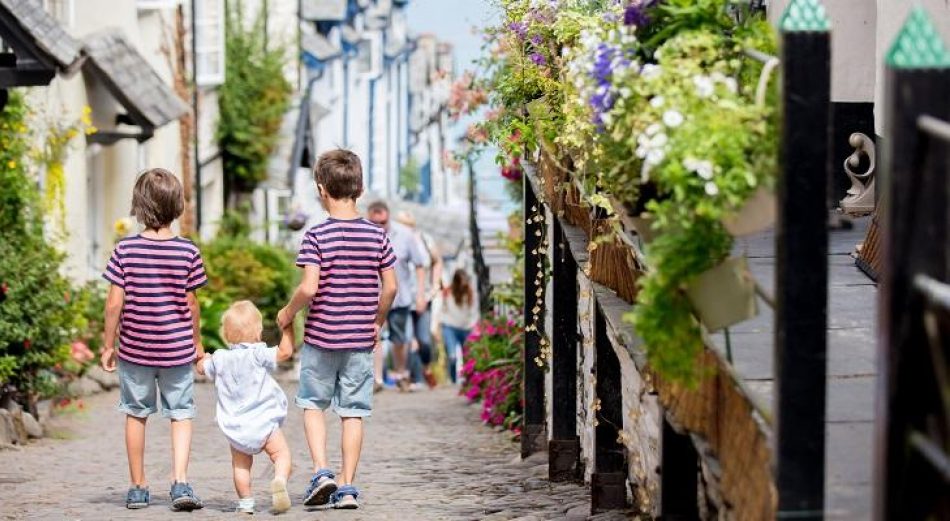 Few places compare with Britain’s country villages. They offer rural retreats, hidden hideaways and a slice of country life. Prices can vary from less than £500,000 for a cute Cotswold cottage, to a multi-million-pound country manor in Sussex.

We have scoured the UK to find the top 20 prettiest villages. Discover your perfect property:

This must be one of Britain's finest villages, and at this time of the year it has a full calendar of activity. Lavenham offers the perfect backdrop with fine historic buildings and the tallest village church tower in England.

The village plays host to live events, car rallies and has been the location for TV productions and films including Harry Potter and the Deathly Hallows.

On the Scottish Isle of Mull, this seaside town may be larger than a village, but it shares a similar atmosphere. It is known for its colourful houses and as the filming location of children's TV show Balamory. The port is always busy with fishing boats and the ferry to and from Kilchoan.

Tobermory was built as a fishing port in the late 18th century and is now the main town on Mull. It has brightly painted buildings along the main street to the pier and the high woodland-fringed hills surrounding the bay. The town has a good variety of shops, hotels, and other accommodation as well as being the administrative centre for the island.

Properties in Tobermory had an overall average price of £224,569 over the last year.*

Ilmington stands out in our top 20 for several reasons: it has two welcoming inns, The Red Lion and The Howard Arms, as well as a tennis club.

Ilmington is a beautiful village mainly built of warm honey coloured local Cotswolds limestone nestling at the foot of the Campden hills, in particular, Windmill Hill, which is surrounded by green fields and classed as part of the Cotswolds area of outstanding natural beauty.

If you are in search of a quintessential country village, try West Somerton. It is ideal for fishing, walking and boating. There is a wind farm near the village and a pretty ancient church.

Property does not come on the market often, and those that do get snapped up quickly. Properties in West Somerton had an overall average price of £385,000 over the last year.*

This village ticks all the boxes; it is beautiful, historic and full of charm. The medieval and Georgian cottages are arranged along the winding country lanes. The village centre has a sizeable duck pond and a village green. There are three charming pubs, a post office, general store, a health centre and a primary school.

In the heart of Snowdonia, Beddgelert is regarded as one of the prettiest villages in the region.

The village, in keeping with its location in the Snowdonia National Park, is picturesque and unspoiled. The small and friendly village boasts a full range of amenities including great guesthouses, arts and crafts shops and workshops, restaurants and traditional pubs. It certainly is one of the most attractive villages in Wales.

Properties in this area are popular. In nearby villages, prices can reach £725,000, while properties in Beddgelert had an overall average price of £247,944 over the last year.

The setting for one of 'Britain's best-loved adverts' is in Shaftesbury. In a 1973 advert for Hovis bread, a baker's boy had to push his bike to the top of the cobbled hill. Even now, people still visit the village to see the famous hill. The village has a farmers' market, information centre, museum and supermarket.

Cricket lovers should head to Hambledon in the South Downs National Park. Hambledon is the 'Cradle of Cricket', where the laws of the present-day game were formalised in 1770 and the early notable matches were played on Broadhalfpenny Down in the 18th century.

The medieval town is home to the enchanting cobbled Mermaid Street, the impressive Norman Church of St Mary, a rich selection of specialist shops and a thriving fishing fleet. Rye was once surrounded on three sides by the sea and its maritime heritage dates to Norman times.

Here is a picturesque country village perfect for nature lovers; the Northumberland Wildlife Trust owns a nature reserve that is home to rare birds. There is seaside-inspired artwork at a gallery, and chances to see fishermen working. Craster is also famed as being the home of the Kipper, a smoked fish delicacy exported to food lovers across the country and reputedly popular with the British Royal Family.

If you're looking for a writer's retreat, head to Wycoller in Lancashire. The Brontes spent much of their life in the area, and the nearby Wycoller Hall is thought to be inspiration for Ferndean Manor in the novel Jane Eyre written by Charlotte Bronte.

Wycoller was featured in the BBC's Countryfile programme and it also appears in the 1970 film "The Railway Children".

Historic three-bedroom homes can cost £450,000 in this area. In the past 20 years house prices have more than doubled with a three-bedroom home costing £235,000 in 2001 now being valued at over half a million pounds.

Goathland is a showbiz village in the North Yorkshire Moors. Both Heartbeat and the first Harry Potter films were shot here, and visitors have flocked to the village ever since.

The North York Moors National Park recommend arriving on the trains of the North Yorkshire Moors Railway, then enjoying lots of local strolls and hikes. The station may be familiar as 'Hogsmeade' station from the early Harry Potter films.

You could expect to pay up to £415,000 for a four-bedroom semi-detached home in this village. Properties in Goathland had an overall average price of £449,667 over the last year. The majority of sales in Goathland during the last year were detached properties, selling for an average price of £523,000. Terraced properties sold for an average of £236,000, with flats fetching £150,000.*

If you are looking to relocate with the whole family, the Pembrokeshire coast could be the perfect location. With lots of things to do and beautiful beaches to enjoy, there is fun for all the family. The traditional activities of agriculture and fishing still take place and have been joined by tourism as a major aspect of the area.

The village is a popular location for family holidays with safe beaches and lots of water-based activities such as sailing, swimming, surfing, kayaking and windsurfing. The area has an abundance of wildlife including birds, seals, dolphins and porpoise. The cliffs and coastal path also provide stunning views and the chance to see a wide variety of beautiful wildflowers.

Properties rarely come on the market here, so be sure to snap up your dream home if you find it. Properties in Dale had an overall average price of £521,500 over the last year.*

Sitting in both an area of outstanding natural beauty and a world heritage site, St Agnes is being preserved for the future. And there's an obvious reason why. With an incredible sandy beach, picturesque cliffs and a great community spirit, this could make you feel like you are on holiday year-round.

You could own a detached four-bedroom cottage for £650,000 although properties in St. Agnes had an overall average price of £502,676 over the last year.*

For pure escapism, Hawkshead is the answer. In the heart of the English Lake District, Hawkhead is a truly historic and wonderfully picturesque village characterised by its cluster of whitewashed houses, archways, alleyways, courtyards and squares.

This hidden gem sits on the east coast of Scotland. Crail is a historic fishing village in the pretty East Neuk of Fife. Explore the narrow wynds of the village or simply take a walk along the quaint harbour to see the fishing boats. Charming cobbled streets tumble down to the miniature harbour, which is sheltered by cliffs and surrounded by historic fishing cottages.

Nature lovers will feel at home in Blakeney, with regular boat trips to see the local seal colony. It is set on a small hill leading down to the harbour and has pretty flint cottages (many for holiday rent), shops, cafes, restaurants, hotels, pubs and inns. In a side street off the quay is the 14th-century Guildhall, which has an early example of a brick-built vaulted ceiling.

This Derbyshire village is heaven for rock climbing enthusiasts. There are also spectacular tors such as Higgar Tor and the enigmatic hillfort at Carl Wark, which has so far defied archaeologists' attempts to date it. Charlotte Bronte visited Hathersage in 1845 and used it as the N'Norton' of the story 'Jane Eyre' - taking the heroine's surname from the local family.

Properties in Hathersage had an overall average price of £513,741 over the last year.*

Get away from it all in the Yorkshire Dales. Here you will find beautiful waterfalls, undulating countryside, and friendly people. There are stunning views, beautiful stone buildings, quirky shops and friendly pubs. There are also waterfalls which are spectacular, particularly the falls at Linton.

If you are looking for a beautiful village with a historic castle at its heart, then Nunney is definitely worth a look.

The ruin from medieval Nunney Castle has walls largely intact. A village trail, available from Frome Tourist Information, is the best way to explore the points of interest including the parish church and The George, an old character coaching inn. Once a year on the first Saturday in August, the village streets are turned over to stalls of all kinds for an old-fashioned Street Fayre.

*House prices updated in July 2022, stats taken from rightmove. Intended as a rough guide only.

Seeking the ideal semi-rural retreat to call home? Click here to discover beautiful properties around the UK or get in touch with your local Fine & Country agent to start your search