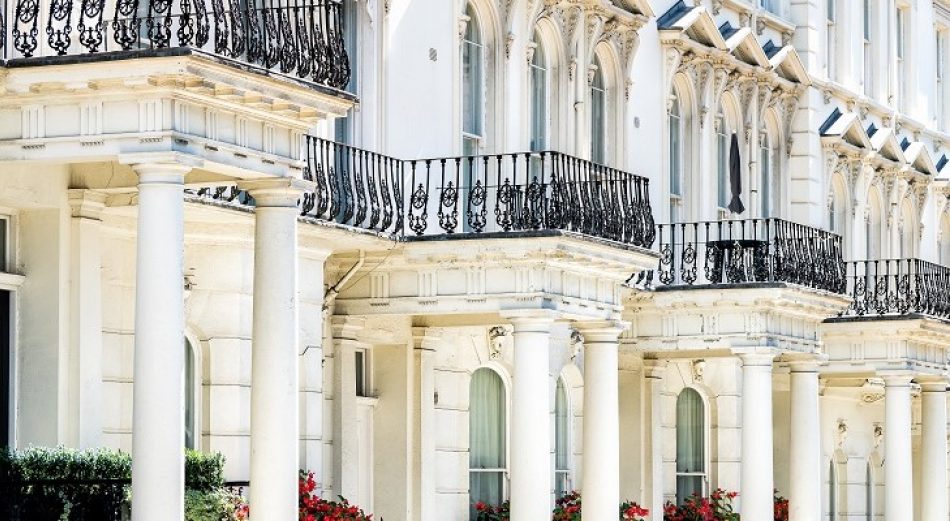 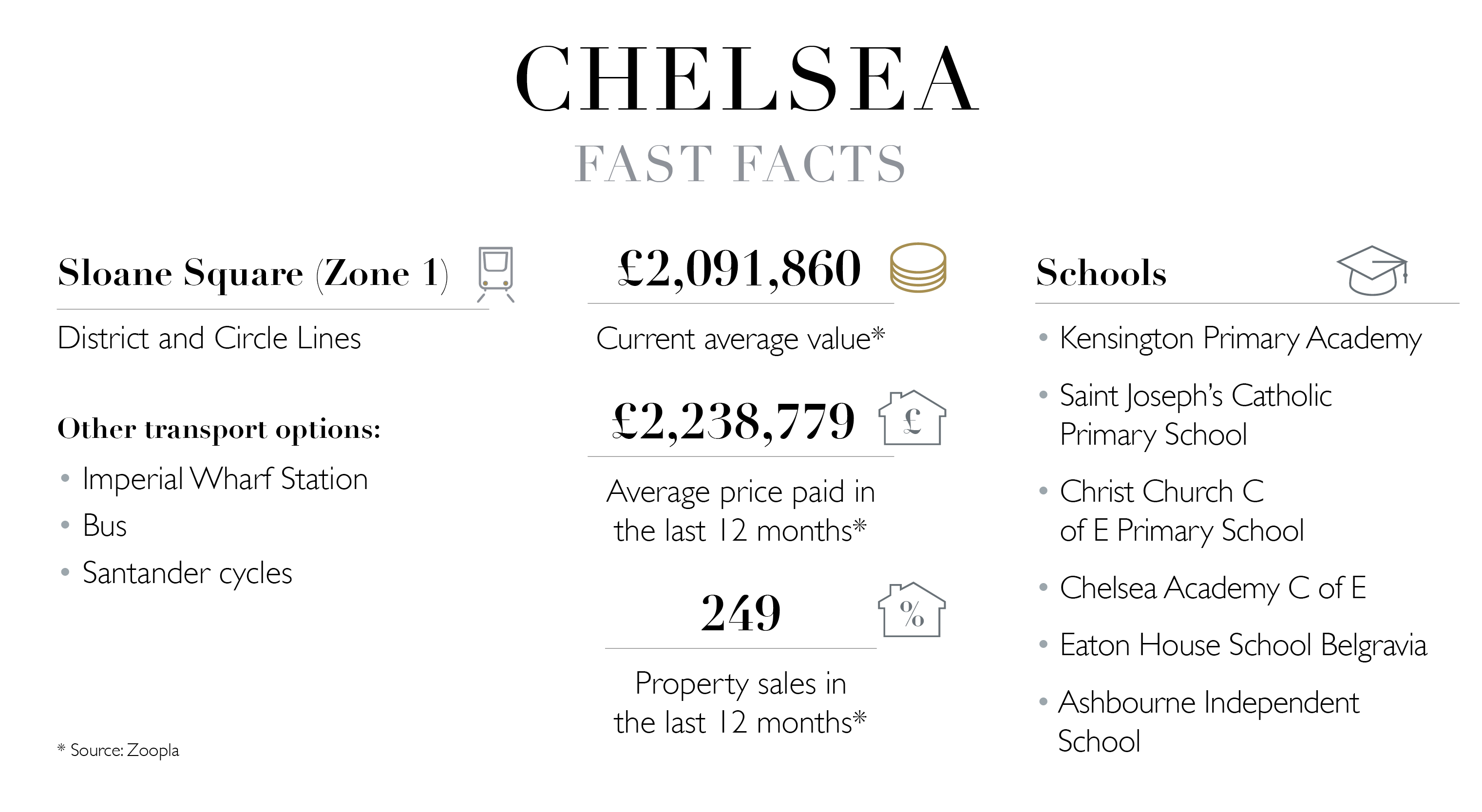 Chelsea is London’s most charming and affluent neighbourhood, home to the rich and famous, including A-listers and international film stars, footballers and multi-billionaire businessmen and women.

Running through Chelsea is the iconic King’s Road, which became a hotspot in the swinging 60s. By the 1980s, it was famously known as the haunt of the “Sloane Ranger”, a term for the young and wealthy trendsetters who frequented the area’s most exclusive clubs and bars. In fact, the area has kept its reputation to this day as the go-to destination for affluent socialites, and there is so much to offer right on your doorstep.

As a top London tourist destination, Chelsea has a feeling of its own, from Instagram-worthy cafés and rows of colourful houses found along King's Road to its iconic shopping scene. 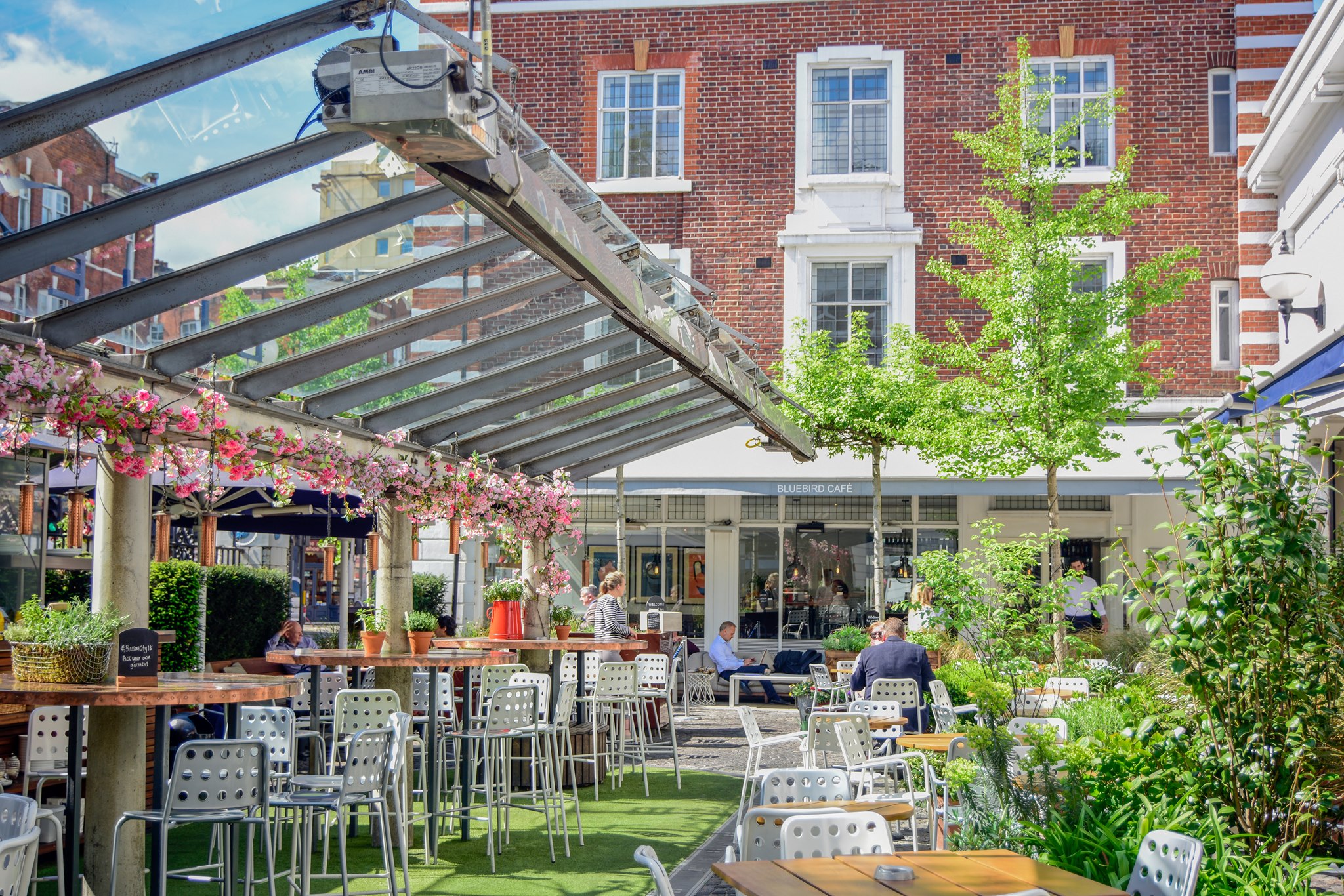 King's Road is home to a vast array of world-famous eateries. Bluebird (pictured above) is a stylish establishment with outdoor seating, and is a top spot for bruch with family and friends. For sophisticated all-day dining amongst eclectic decor and a beautiful garden, The Ivy Chelsea Garden is a Chelsea favourite. At Gaucho, discover London's finest Argentinian steaks and superb seafood dishes or go to Daphne’s for an authentic taste of Italy. For delicious food and cocktails in the perfect shopping pit-stop location, head to Vardo, in Duke of York Square. For dessert, Peggy Porschen is the most Instagrammable spot for a sweet treat.

From the afternoon into the late-night, there is always a lively atmosphere in the bars and clubs of Chelsea. If you are looking for a casual drink in a traditional British pub, head to Chelsea Potter. Alternatively, The Phene is a more trendy local pub with a lively terrace area. As the night draws in, Cuban-influenced club, Embargo Republica, and private members' club, Raffles, attract London's classy and glamorous clientele.

Chelsea is known as London's most fashionable area, with designer boutique shopping along Sloane Street, one of Europe's largest Zara stores in Duke of York Square, and the world-famous department store, Harrods, nearby. If you are an art enthusiast that enjoys marvelling at galleries and exhibitions, Chelsea and Knightsbridge are the hub of art and design, with the Saatchi Gallery, the Natural History Museum and the Victoria and Albert Museum, the world's leading museum of art, design and performance.

Escape from the bricks and mortar, and enjoy Chelsea's oases. Along the Chelsea Embankment, there are beautiful views of The River Thames and the city. Following a stroll by the water, head to Chelsea Physic Garden, London's oldest botanical garden. For even more flora and fauna, the prestigious Chelsea Flower Show takes place every year, where for five days, visitors stroll through show-stopping gardens designed by famous designers with rare flowers, plants and artworks in abundance. 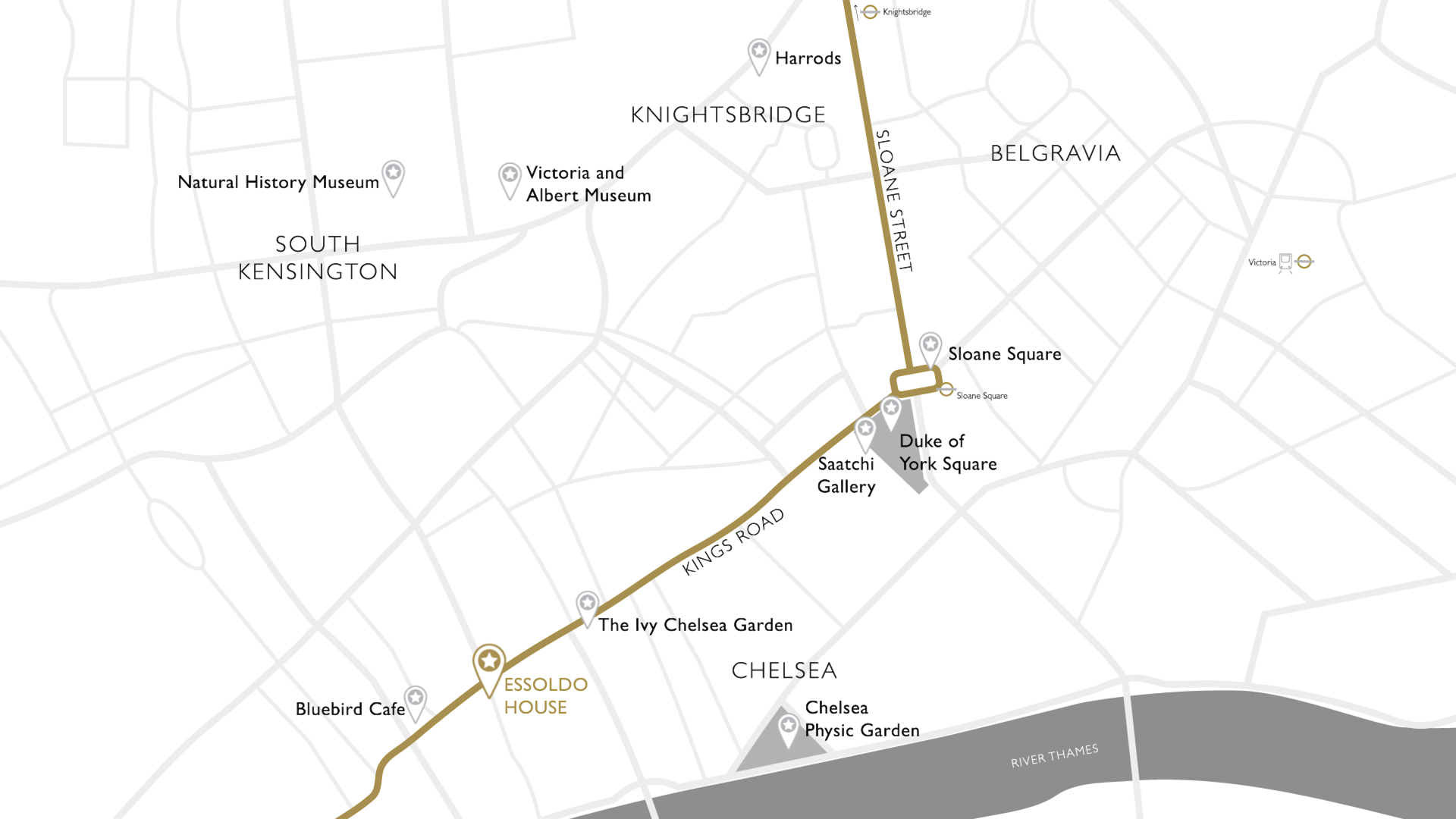 Situated in a prime Zone-1 location, travel options in Chelsea are plentiful. Chelsea's Underground station is Sloane Square, providing links via the District and Circle lines. Commuters in the west of Chelsea can opt for Imperial Wharf Station, found in Zone-2 Fulham, providing trains to Clapham Junction, which offers travel links to Victoria and Waterloo.

The regular commuter buses running through Chelsea are a popular method of travel. All buses stop at Sloane Square and offer direct links to many key London spots, such as Victoria, Liverpool Street, Tottenham Court Road, Finsbury Park, Oxford Circus, and Waterloo.

Properties in the area

Located on one of the most iconic streets in the world, Essoldo House is an impressive London development, offering two-to-three-bedroom apartments with open-plan living and views of King's Road in the exclusive area of Old Chelsea.

All rooms have solid oak flooring with under floor heating and are connected to the latest in smart home technology systems and integrated air-cooling systems.

The building further benefits from a 24-hour porter (security) and underground parking, guarded by electric gates. 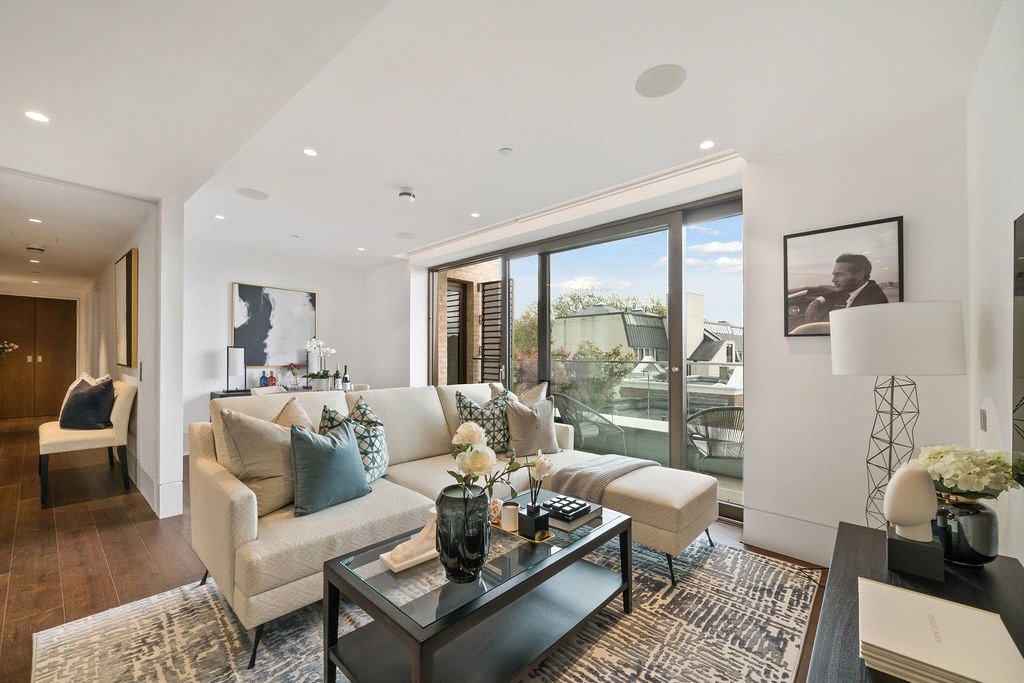 This exquisite two-double-bedroom apartment is situated on the second floor and benefits from two bathrooms, including one en-suite, a separate cloakroom and an open-plan reception room leading out to a private south-facing terrace. 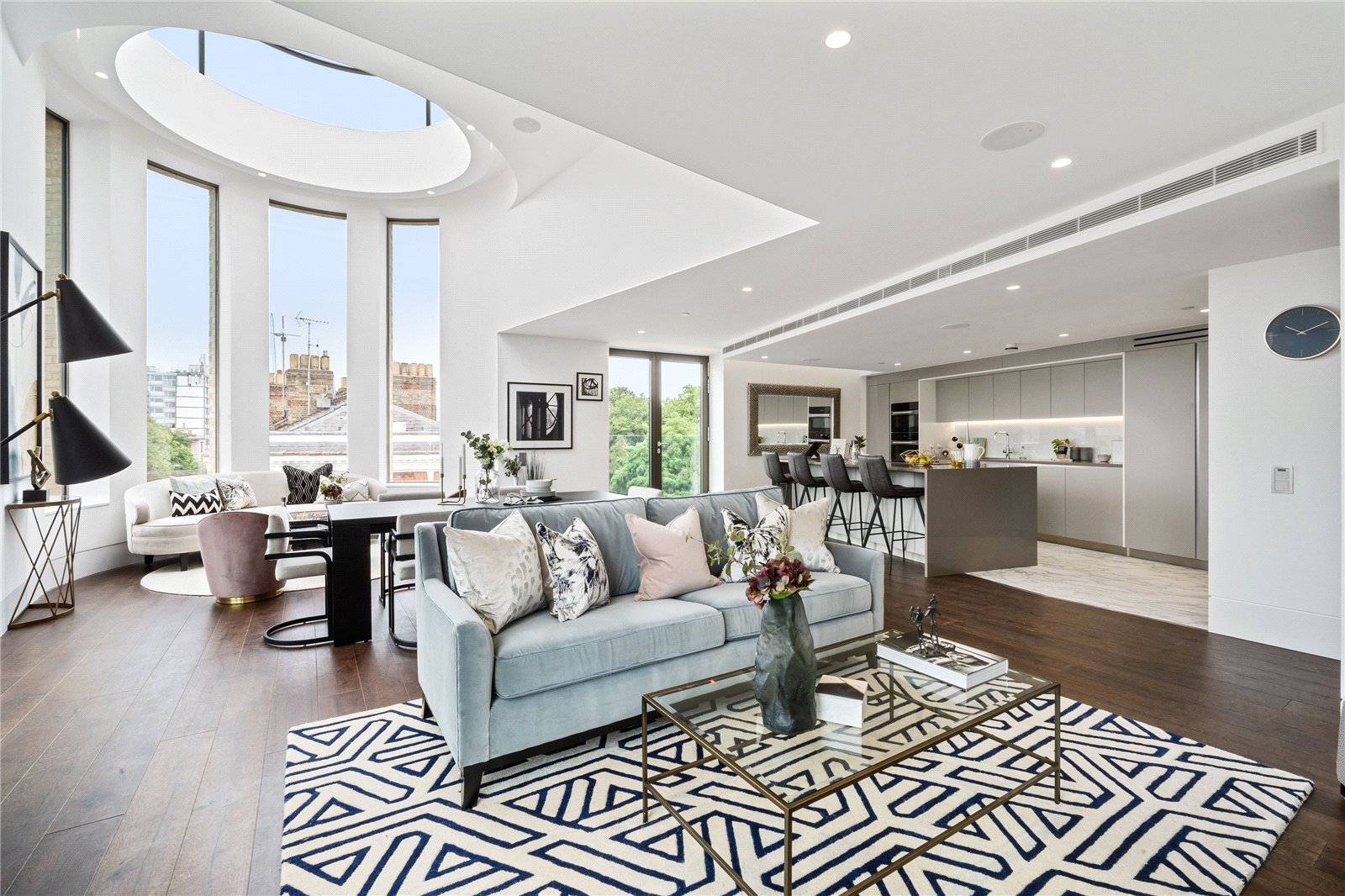 This impressive three-bedroom penthouse apartment within Essoldo House benefits from a jaw-dropping open-plan living reception including a glass rotunda dome.

For more information about properties in Chelsea and the surrounding areas, contact Fine & Country Notting Hill and Chelsea on 07843034525 or nottinghill@fineandcountry.com.