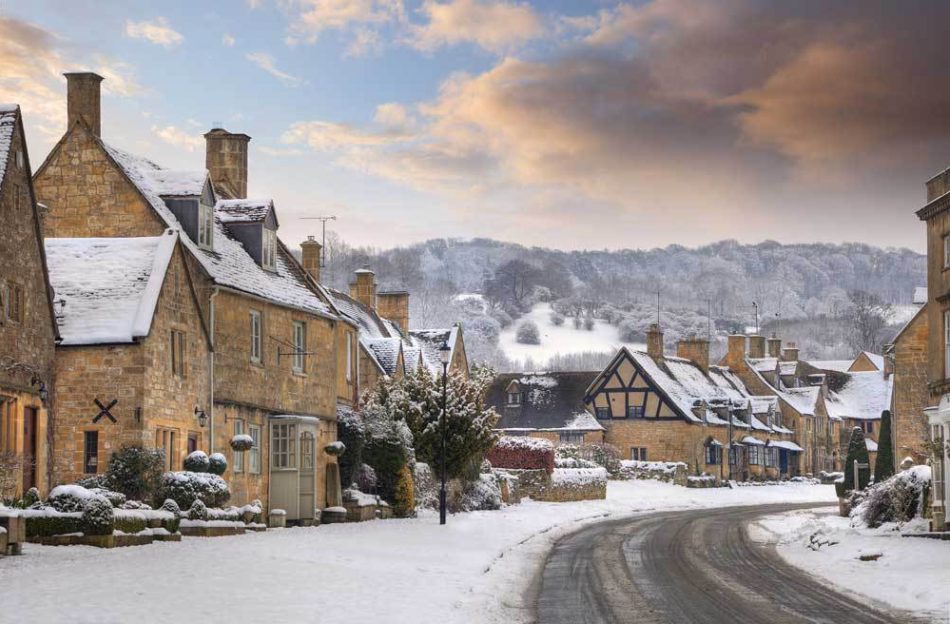 These picture postcard villages are stunning in the summer, but when a dusting of snow falls over winter they take on a magical quality. If you’ve always dreamed of living in such a beautiful location, then consider moving to these villages across the UK.


Originally, Castle Coombe was a British hill fort which became occupied by the Romans due to its proximity to The Fosse Way. After the Romans came the Normans, who built the fort up into a Castle.

More recently, the picturesque streets have been the backdrop to films such as Doctor Doolittle, War Horse and Stardust.

Fine & Country Bath has a rare opportunity to own a period property dating back to the 17th century located at the historic heart of Castle Coombe. It has three reception rooms, four bedrooms, and easy access to pubs and shops.


This village is not across the pond in New York, but actually in the Cotswolds. The village is named after its wide central street, boarded by fine green chestnut trees and an amazing array of beautiful Cotswolds stone houses dating from the 17th and 18th century.

At Christmas time every year, the red chestnut trees that line the high street are adorned in fairy lights. On special nights, carol singers and street entertainers come out for an evening of Christmas shopping.

For sale nearby is Bolton Farm, an exquisite Georgian farmhouse which offers an abundance of character and is steeped in local history. Dating back to 1780 the property has seen significant change over the years and the current vendors have continued to refurbish the property, using reclaimed materials wherever possible to reflect its long history, whilst aiming to create a home which works equally well for modern day living.


While it isn’t a traditional village, this perfectly designed tourist attraction would be a top winter village for many. The attraction welcomes around 225,000 visitors per year to see the colorful buildings, coastal setting, and famous Portmeirion Hotel.

Clough Williams-Ellis bought the land on the Dwyryd estuary near his home in 1925, and the full competition wasn’t finished until 1976.

The same architect built an imposing property that is for sale nearby with Fine & Country North Wales. Mardir has in recent years undergone an extensive yet sympathetic, architect-led restoration where much attention to detail was paid to ensure both the restoration and additional accommodation to the original building appeared as ‘original’ as possible.

The property displays a strong character reference to Sir Clough Williams-Ellis’ classical work, so retention of the original fireplaces was simply a must as were several other facets which give this home its distinction and essential character.


The setting for one of ‘Britain’s best-loved adverts’ is in Shaftesbury. In a 1973 advert for Hovis bread, a baker’s boy had to push his bike to the top of the cobbled hill. Even now, people still visit the village to see the famous hill. The village has a farmers’ market, information centre, museum and supermarket.

A few miles away is a large detached property which can be reached via a gated entrance and long driveway. Sitting within grounds of approximately 0.4 acres the property offers spacious and versatile living space along with four bedrooms, two ensuites and a family bathroom.

For those who want to live in the village itself, house prices range from £120,000 for a two-bedroom house, to over £1.3 million.

Ilfracombe and neighbouring Woolacombe are picturesque coastal villages on the Devon coast. It is very popular with tourists, especially in the summer high season, though it certainly holds a charm in winter as well. A two-bedroom terraced house in the area can cost as little as £137,000 and five-bedroom houses are generally over £500,000.

‘Tides‘ is a stunning and highly individual contemporary family home occupying a commanding elevated cliff top position overlooking Ilfracombe and with direct and uninterrupted views across the rugged headland, Bristol Channel and distant Welsh coast. The house is a ‘grand design’ in superb order throughout with very high-quality fixtures and fittings with no expense spared.


Rated as one of the most beautiful villages in the UK, Lower Slaughter looks stunning in winter. This quaint village sits beside the little Eye stream and is known for its unspoilt limestone cottages in the traditional Cotswold style.

Copse Hill Road in the village was once named as the most romantic street in Britain in a poll for Google Street View, so it’s the perfect destination for couples.

On the edge of the village of Lower Slaughter, West Allotment Cottage is a Cotswold stone-built property originally commissioned by the Whitmore family for their estate workers during the latter part of the 19th century. Indeed the cottage has the family initials, CSW, carved into the stonework on the gable end.

Hambledon, Hampshire
Hambledon is best known as the ‘Cradle of Cricket’. It is thought that Hambledon Club, one of the oldest cricket clubs known, was formed about 1750. Hambledon was England’s leading cricket club from about 1765 until the formation of MCC (Marylebone Cricket Club) in 1787.

Set on the outskirts of this picturesque Hampshire village, Woodlands is the perfect equestrian home occupying approximately 3.5 acres on the edge of Broadhalfpenny Down, famously known as the Cradle of Cricket. The Bat & Ball, an excellent hostelry only a few hundred yards along the lane, is said to have historic connections with the game of cricket when the village club was founded in circa 1750.

Nestling in an Area of Outstanding Natural Beauty, there are far reaching elevated views towards Hambledon Vineyard and the South Downs National Park, yet conveniently located within three miles of Hambledon village and two miles from Clanfield village shops.

In the Chiltern Hills, on the Oxfordshire boundary, is the village of Ibstone. The village windmill, Cobstone, is famed for being the home of character Caractacus Potts’ workshop in the 1968 film, Chitty Chitty Bang Bang.

Crown Cottage in Ibstone is believed to date back to around 1500 and then later extended over the years to now provide over 3,100 sq.ft. of accommodation together with a detached converted barn. The house has immense character and charm whilst still giving a modern feel to what is now a fabulous family home.


The village is nearly 60 miles from London, between Colchester and Ipswich. The village has a fifteenth-century flint faced church which is clearly visible from the A12. It is also served by a primary school, post office and village store, and three pubs. House prices in the area range from £125,000 for a semi-detached house to £950,000.

Fine & Country Colchester are selling a farmhouse property a few minute’s drive away for £895,000. The main farmhouse has been sympathetically extended over the years to create a warm and welcoming home, and the old barn has been converted into a lovely four bedroom house that the current owners let out successfully for holiday accommodation.

Chipping Campden was one of the most important of the medieval wool towns and famous throughout Europe. This legacy of fame and prosperity is everything that give the town its character. In 1970 the High Street and much of the rest of the town was officially designated a conservation area to preserve the ancient town for centuries to come.

On the edge of the small town is this a charming Cotswold stone detached house dating back to the early 1950s. The current owners have renovated the property with extensive redesign and improvement whilst the delightfully landscaped garden is bordered by a mature woodland offering absolute privacy.