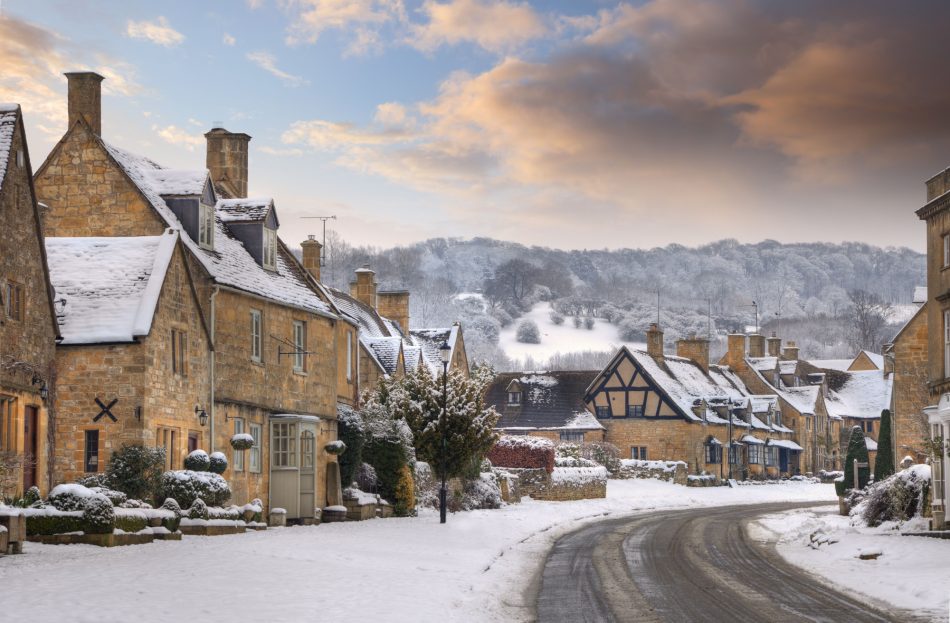 The festive season has arrived. This is a time to snuggle up by the fire, indulge in festive foods, relax with a good book and spend time with your family. This year, we have scoured the country for the prettiest winter villages. We have chosen 10 picturesque villages in the Peak District, North Yorkshire, Dorset and the Cotswolds, all with one thing in common; they are the perfect places to visit this Christmas. 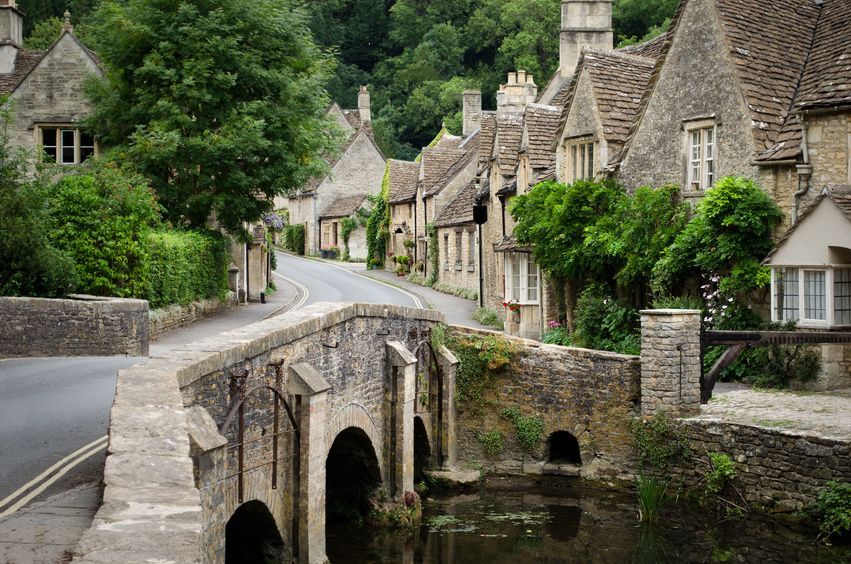 Will it snow in Castle Combe this Christmas?

This village has been named the prettiest in England many times, and for good reason. Visitors have been drawn to this beautiful settlement for over a century, attracted by the small streets leading from the Market Cross to the By Brook, which is incredibly picturesque.

Even the film industry has noticed the delights of Castle Coombe, as Doctor Doolittle was filmed here back in 1966 and, in more recent years, it played a large role in War Horse. 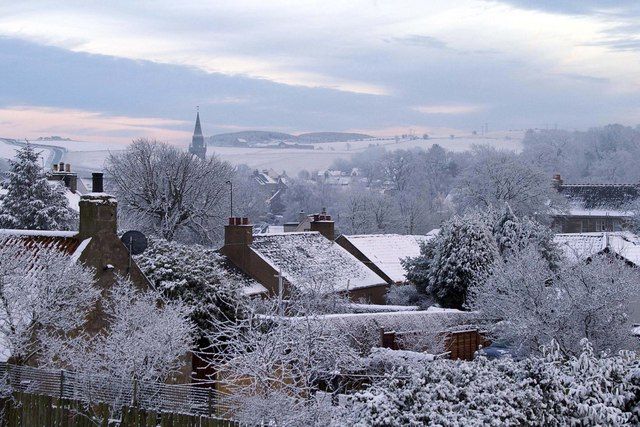 There is no shortage of beautiful villages across Scotland. Here is a stunning part of the country, with attractive stone cottages, a friendly inn, and Ceres is one of the only villages in Scotland to have its own village green.

“Ceres is a remarkably unspoilt and attractive village. As you wander the streets you do get a sense of travelling back in time,” says Undiscovered Scotland. 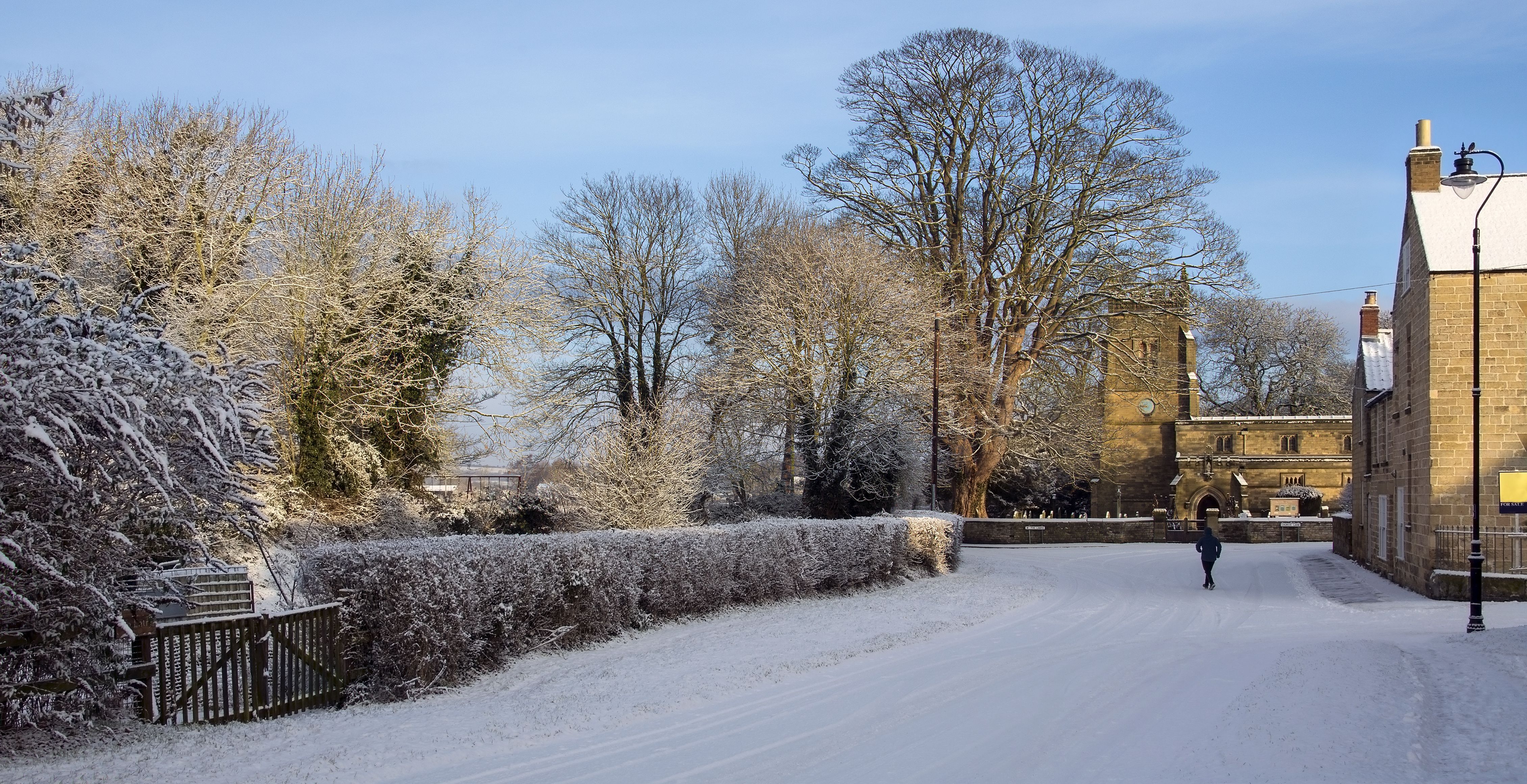 Think of the perfect country village, and Slingsby ticks all the boxes: it has a bakery, local pub, and even a castle.

Slingsby lies at the foot of the gently sloping land which forms the northern edge of the Howardian Hills (an Area of Outstanding Natural Beauty), with the Vale of Pickering spreading out to its north and east. On the western edge of the village lie the ruins of a 17th-century manor house called Slingsby ‘Castle’. 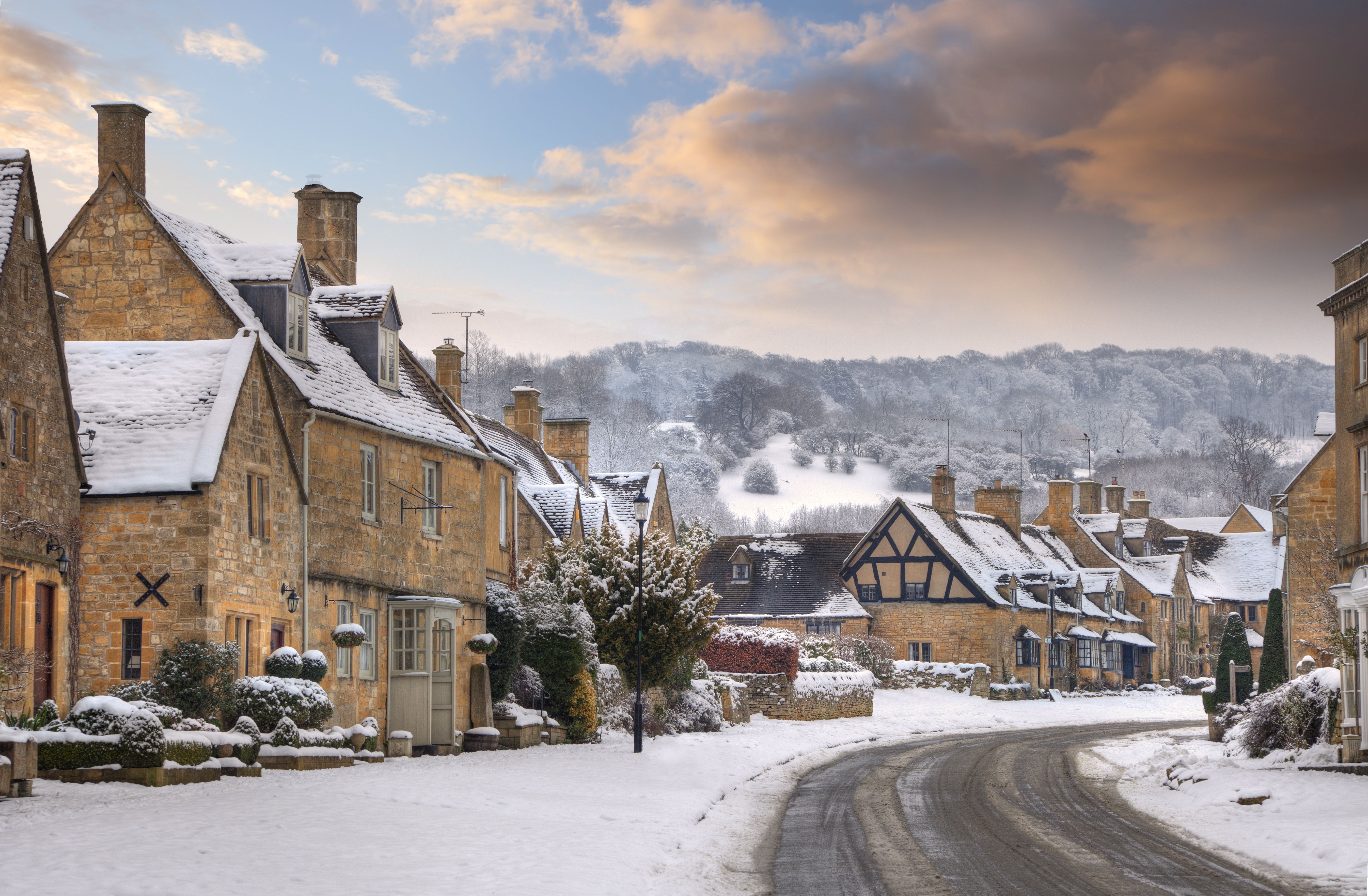 Broadway is certainly the ultimate Christmas village, and photographers flock here to see the stone houses blanketed in a layer of snow.

You are spoiled for choice when it comes to pretty villages in the Cotswolds. Broadway stands out for its artists and writers, including J.M. Barrie, William Morris, and John Singer Sargent.

“The beautiful and historic Cotswold village of Broadway is a memorable place to stay and a perfect base from which to tour the local area and enjoy the stunning walks. The pretty High Street is lined with horse chestnut trees and includes a mixture of period houses and picturesque honey-coloured Cotswold stone cottages,” says Broadway Cotswolds. 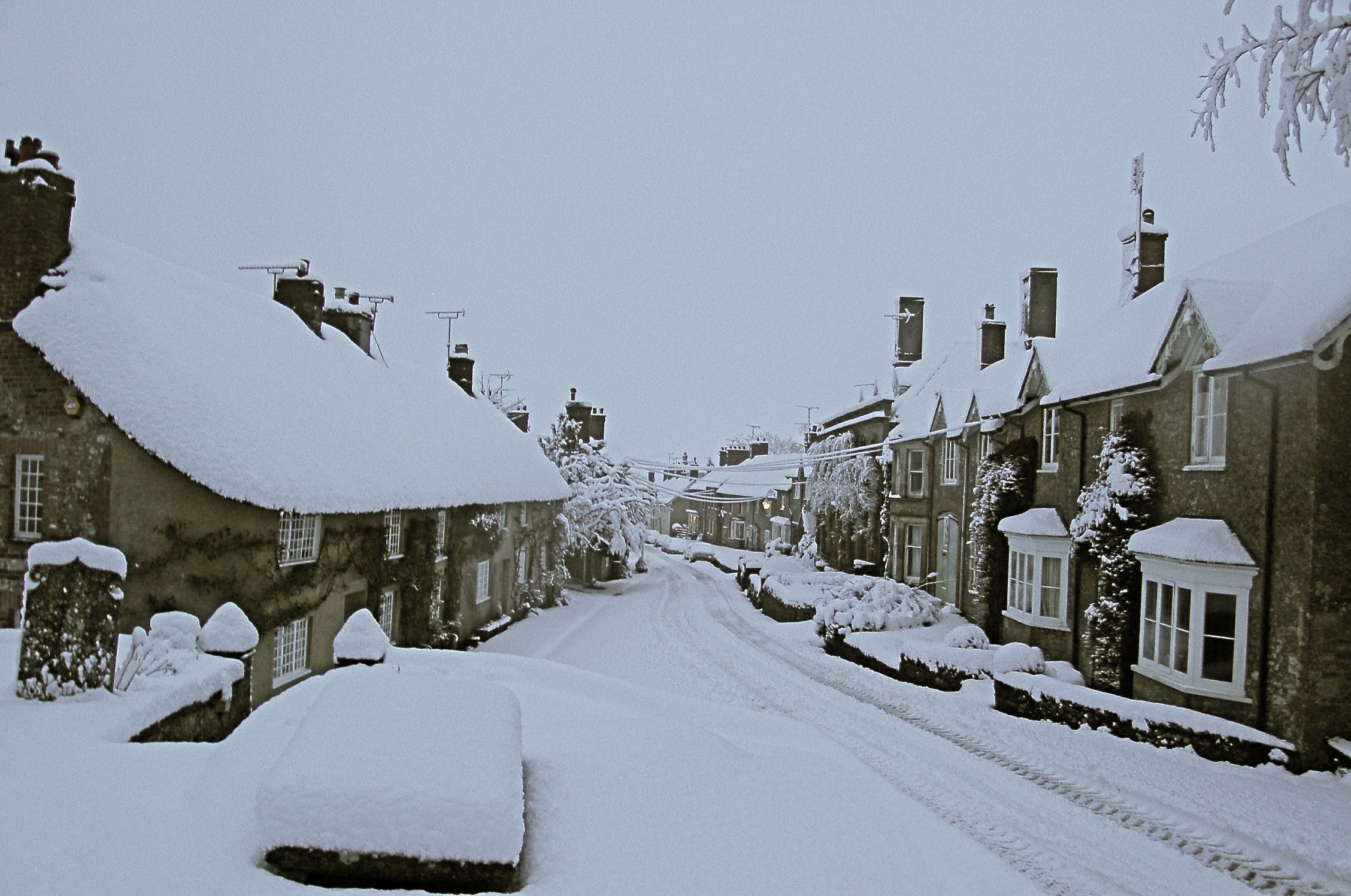 Will snow return to this picturesque village in Dorset this winter?

Evershot is a village that seems to have stepped back in time. It has a church with a ring of six functional bells, a post office/shop, doctors' surgery, primary school, bakery, pub, and a hotel. There is a great community atmosphere, with the 200 residents coming together during the festive season for the annual Christmas party. 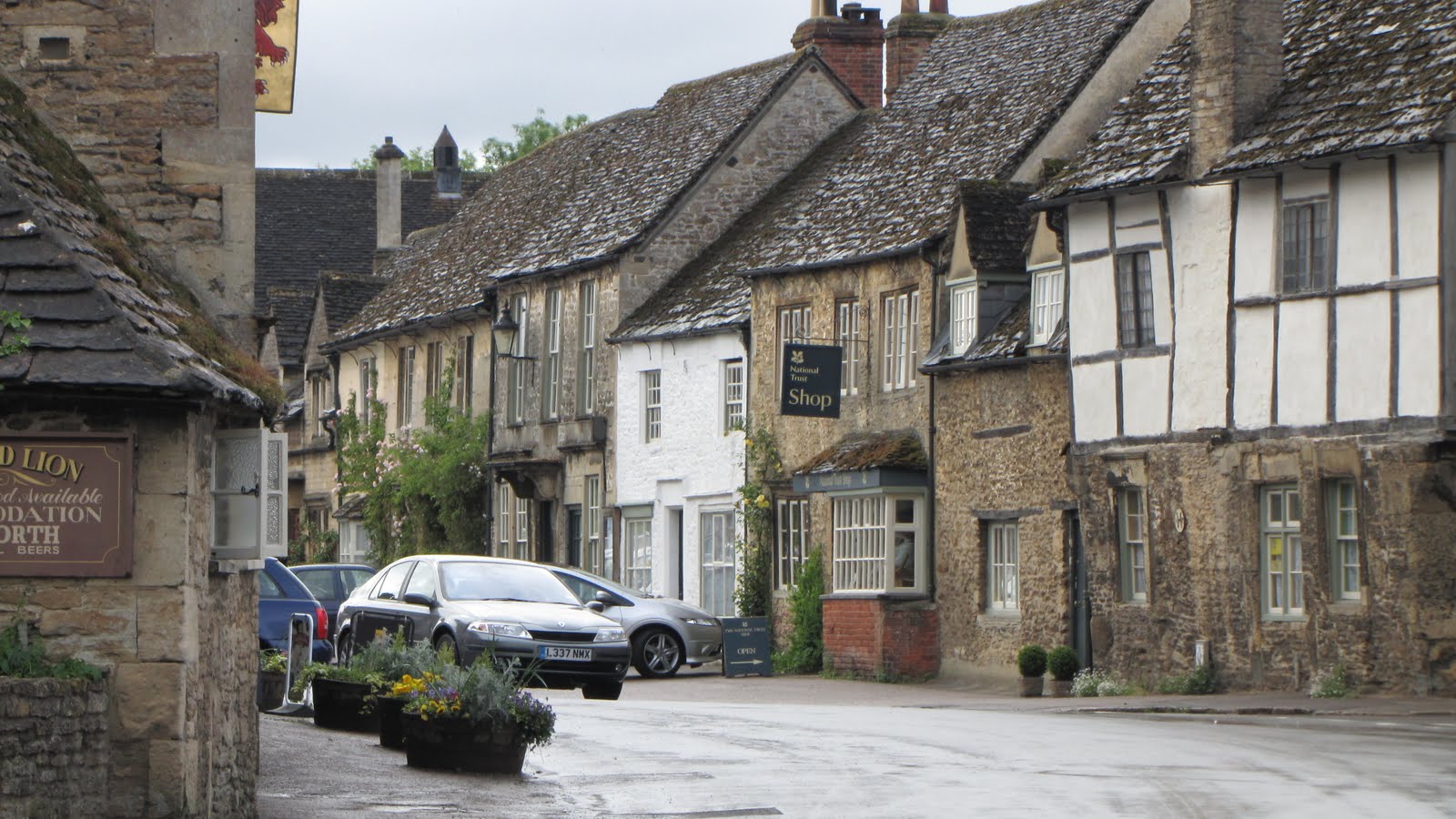 Lacock has many claims to fame, from appearing in Harry Potter and the Half-Blood Prince, Downton Abbey and the BBC’s Pride and Prejudice. It would make the perfect place to live with its stone cottages full of character.

It may be too cold to paddle in the Bide Brook at Christmastime, but Lacock Abbey is a perfect place to explore and the National Trust have special festive events to enjoy.

Chatsworth House stands out as one of Britain’s most impressive country estates. The nearby village of Beeley is equally as charming with its period properties and popular pub.

“Beeley sits snugly amongst the gently undulating wooded hills which rise on the east bank of the River Derwent about a mile and a half due south of Chatsworth House, the home of the Duke & Duchess of Devonshire,” says Peak District Online. 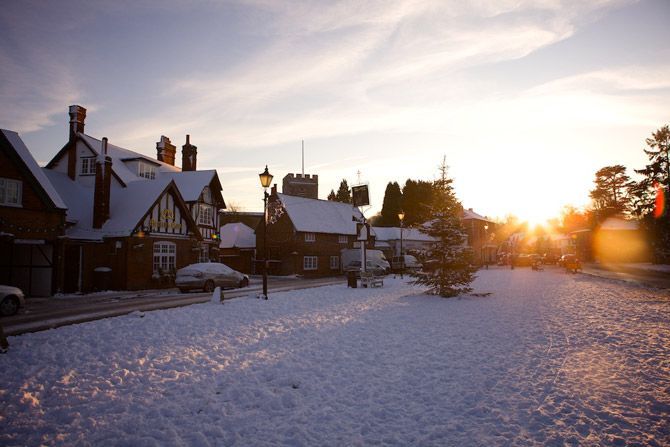 Chalfont St Giles makes our Christmas top 10 for many reasons.

The best dressed Christmas window competition invites local businesses to design festive windows, and then the children at the local school announce one winner every year. It has a quintessentially English duck pond, surrounded by period properties, a great variety of restaurants and attractive churches. The village also won the Pushman Cup for the Best Kept Village in Buckinghamshire in 2016.

“Bibury was once described by William Morris as ‘the most beautiful village in England’. The cottages of Arlington Row are often referred to as the most photographed and beautiful cottages in the country,” says Bibury.com.

Residents love this village for many reasons. The River Coln flows through the centre of the village, there are beautiful stained glass windows in the church, and it even appeared in the 1992 Christmas stamp set issued by the Royal Mail. 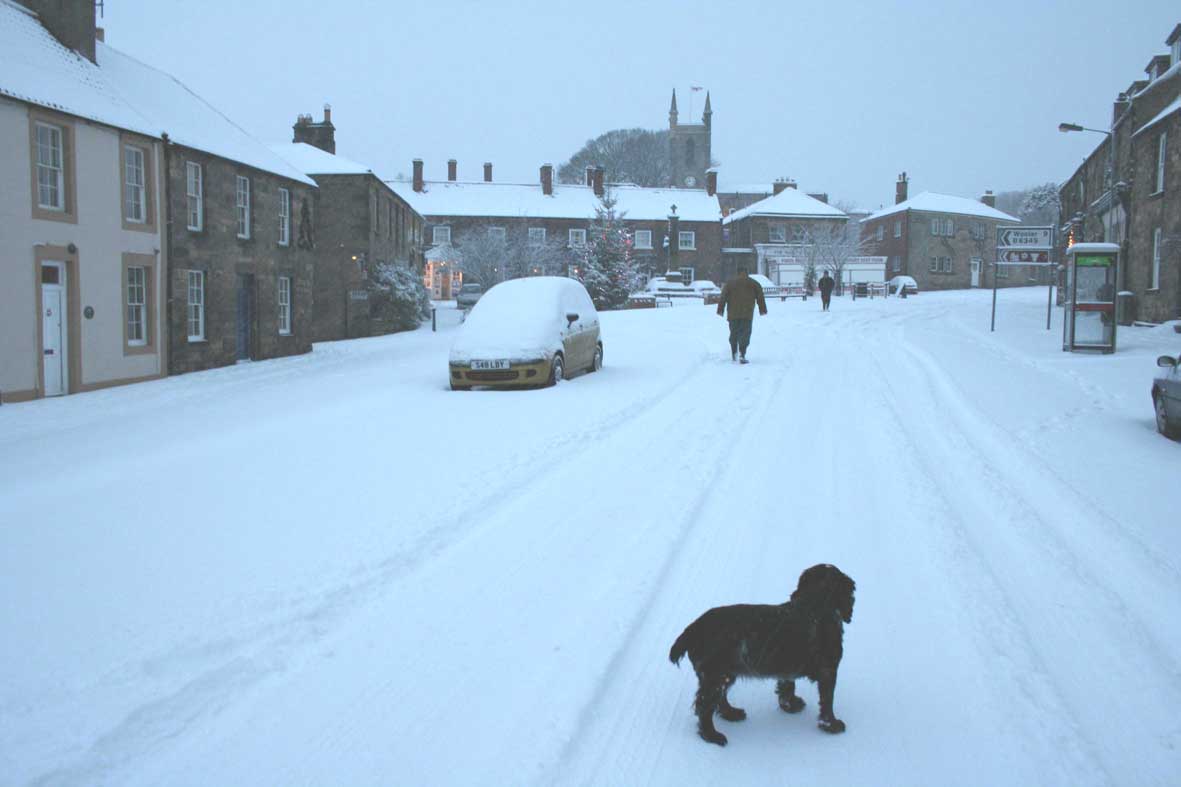 Belford is an ancient village situated in north Northumberland. In the centre of the village, you will find Market Square and its medieval cross. It is a thriving community with a large number of community clubs, societies, a host of local businesses and many places to stay. The village is great for cycling or walking holidays and is just a short distance from the Northumberland coast.

For those with an interest in local history, fishing and golf, it's a great base to explore the area. If you are looking for a more relaxed pace, it is great to relax and soak up the beautiful landscapes, ranging from sandy beaches through wild moorland to the splendour of the Cheviots hills

These Christmas villages are all great places to visit in the winter or live year-round. Start your property search on Fine & Country's homepage, or click here to request a valuation of your property.