The finest view in all my kingdom; King Charles 1 description of the view from Bridgnorth’s Castle Walk

Bridgnorth is a delightful Shropshire market town located some 14 miles to the west of Wolverhampton and bisected by the River Severn. The town is unique in the UK in that it has a High Town and a Low Town connected by the only inland funicular railway in the UK.

The towns prominent features include the Castle Keep which lists at a degree greater than the leaning tower of Pisa, Thomas Telford’s noted St. Mary’s Church and the timber framed Town Hall which was moved from Much Wenlock in the 16th century and stands on stilts ‘in the middle of the High Street’.

The Town Centre offers a comprehensive range of facilities including a number of national multiple shops as well as High Street Banks and more specialist traders typical of a market town. The town is host to a street market on a Saturday when one side of the High Street is given over to market stalls.

Bridgnorth is well catered for in having a number of public houses and restaurants and quite unusual for a town of its size it has a cinema which attracts a wide ranging clientele and all the latest film releases.

The town also offers an excellent range of sporting facilities including football, rugby, cricket, hockey, tennis and the golf club is located approximately one mile to the north of the town along the banks of the River Severn with many interesting holes. The river itself offers plenty of scope for the keen angler.

Bridgnorth is readily accessible to the national motorway network via the M54 and there are direct trains from Wolverhampton to London Euston in under two hours. Birmingham Airport is approximately an hour away whilst Manchester is some one and a half hours distance. Although having no direct rail links to the National Network the Severn Valley Railway is one of the country’s premier preserved steam railways and does link during summer months and weekends to the national rail network at Kidderminster. 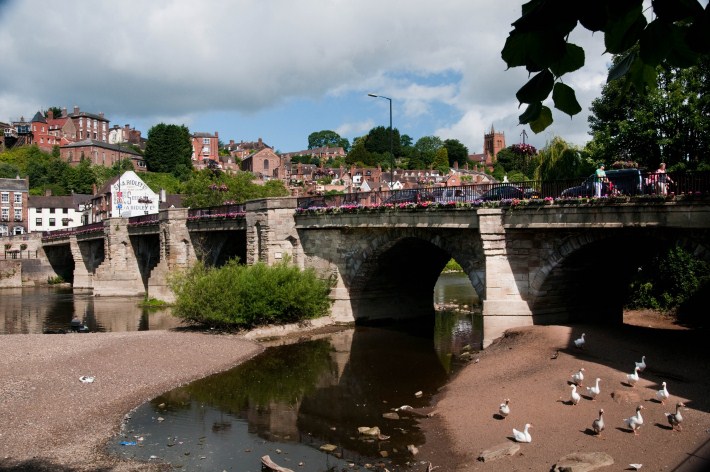 The River Seven running through Bridgnorth

There are a number of primary schools located within the town and in the surrounding villages and two well regarded secondary schools. Bridgnorth Leisure Centre offers swimming, squash and an all weather astro turf pitch whilst the town’s unique Theatre On The Steps hosts a number of touring companies as well as producing their own shows. A separate Theatre Company Bridgnorth Players has recently won regional awards for the quality of their productions.

The surrounding Shropshire countryside it is noted as some of the finest in the country with the Brown Clee Hills noted Shropshire landmarks and offering excellent facilities for outdoor pursuits.

King Charles I described the view from the Castle Walk in Bridgnorth as ‘the finest in all his Kingdom’ and there could be no doubt that the quality of life afforded by this middle of England market town marks it out as an excellent place to bring up a family or retire or simply to act as a commuter base for travel to the West Midlands.