“Forge Cottage” is an impressive 18th Century, four bedroom, four bathroom executive home retaining much of its original charm and character positioned on a beautiful ¼ acre plot in Little Almshoe, a small hamlet south of the sought after village of St Ippolyts.

With exposed oak beams and brick patterns, cast iron fireplaces and monkey tail window handles this property certainly appeals to the traditionalist looking for that next move into the country, with far reaching countryside views that do not disappoint. “Forge Cottage” combines the expectant charm and character of an 18th Century residence but thanks to its technological additions actually drags it right into the 21st Century boasting some of the most cutting-edge advancements on offer. From the NEST controlled heating, CAT 6 wiring, zonal speakers and WIFI hotspots, air conditioning and sound proofing it is the attention to detail that makes this home so impressive. With a ¼ acres of land, four bedrooms, four bathrooms, four reception rooms, seven car drive and the Old Forge as an outbuilding/garage/workshop this property is perfect for any buyer who demands all the creature comforts of a substantial home in that idyllic country setting.

STEP INSIDE
Expanding over 2600SQFT the main entrance is accessed via a pretty picket fence and solid oak door into the main hallway which provides a wealth of beams and plastered walls as well as the original bellows hanging proud on the inner wall. A feature fireplace and hearth also occupy the space with the study featured at one end which benefits from oak wooden floors and the central media cupboard. This room also accesses the basement. Fully tanked and tiled the room itself has two hot water tanks (in case one fails!) and provides easy access to the boiler and underfloor heating controls. Back on the ground floor there is also a TV room, complete with built in acoustic glass and double soundproofed ceilings, air conditioning and HEOS speakers. A utility room/ downstairs W/C is also accessed off the hall with a Burlington heritage suite including an aluminium flush tank.

STEP INSIDE CONTINUED
It is the kitchen/sitting room and dining room however that deserves the most attention, which is undeniably the hub of this home. The 50ft of multi-functional space expands across the whole rear of the property with the kitchen itself acknowledged as the oldest part of the house. Featuring exposed beams and a double height semi vaulted ceiling this incredibly light room enjoys a bespoke Neptune kitchen with quartz counter tops, electric Aga, Bosch appliances, centre island and double Belfast sinks. The dining area is positioned off the kitchen and is one of the newest additions to the extension which was created by the current owners. Bathed in light, thanks to the Velux windows and three sets of French Doors the space cleverly links with the kitchen and the inviting sitting room beyond.

FIRST FLOOR
Upstairs off the central landing are four large double bedrooms, three en-suites and a family bathroom. The bedrooms all currently contain king-size beds so are ample in size with the two largest also benefiting from built in wardrobes. The main bedroom itself is a particularly pleasant space positioned to the rear of the property with the ensuite enjoying underfloor heating, anti-mist mirrors and air conditioning.

STEP OUTSIDE
The property sits on the corner plot at right angles facing away from the road and extends 0.24 acres in total. Facing predominately East the rear garden receives morning to afternoon sun with the pergola catching some welcome shade from the summer heat. The lawn itself stretches over 150ft from the house and includes a patio area, chicken coup, shed and access to the Forge. Currently used as a large garage and workshop this original building could be easily converted into an annex (STPP) and still houses much of its originality including original glazed windows. Parking is available via a shingled driveway for multiple cars with additional parking available at the base of the plot via swing gates.

ABOUT THE AREA
Little Almshoe is a small hamlet of approx. 6-10 properties nestled in the Hertfordshire countryside between the two market towns of Hitchin (2.5 miles) and Codicote (3 miles) accessed via the B656. There is an active community of young families, commuters and older people in the nearby village of St Ipployts which also has a popular primary school. The nearest public house is the �Rusty Gun�, an upmarket gastro pub which is just within eyesight of the property along the main road.

TRANSPORT LINKS
By road the A1 (M) is 2.4 miles from the property which links London and Cambridge to the North. The nearest airport is London Luton Airport which is 8 miles away via the A505. By rail, Hitchin station is just 3 miles on east coast mainline with the fastest service to London Kings Cross taking just 30 minutes, to Cambridge takes 29 minutes and Peterborough, 37 minutes. 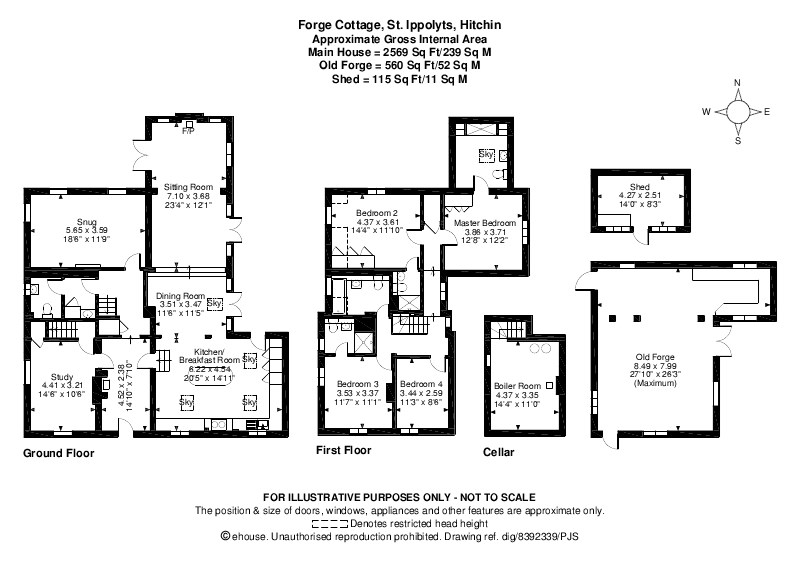