This beautiful Grade II listed Jacobean home stands in gardens of around 2.6 Acres and is set back at the end of a long drive leading from the heart of this quintessential Buckinghamshire village.Currently with 4 bedrooms, planning permission has been granted to provide an adjoining two storey barn style dwelling providing a self contained principal bedroom suite with a large galleried live-in kitchen.

The familiar beech and bluebell woods of the Chilterns AONB sit on London's doorstep. Drayton Beauchamp is a pretty village on the lower slopes, just outside Tring to the East.

The name Drayton Beauchamp is composed of two parts. The first part, Drayton, is believed to mean 'place where timber is dragged'. The second part, Beauchamp, derives from a family of that name that historically owned property in the village.

The Dower House is a wonderful Grade Two listed home and an important local landmark property with much history and unspoilt features abound. It is approached via a discrete gated entrance off the village centre and is set towards the back of the plot at the end of its own private drive, which is more than 700 feet long. One of the most engaging features of this property is the privacy afforded by the large gardens.

Believed to have been built for The Dowager Lady Mary Cheyne after the death of her husband Sir Francis of Drayton Beauchamp Manor in 1620, making it of Jacobean origin. The unusually high ceilings suggest the property was built as a superior residence and it has remained unaltered with many retained original fixtures and fittings. Due to the originality of the plaster work and décor, the property has appeared in numerous TV and big screen productions, predominantly period dramas. The house was once owned by the well-known conductor and composer Arthur Reynolds, responsible for such scores as "1066 and all that". During this period it was featured in Ideal Home magazine, July 1949.

There are a wealth of architectural details including chamfered ceiling beams, open fireplaces (one with a bread oven), braced doors and floors of brick in the kitchen and the breakfast room with wooden floors of oak and elm in the remainder of the house.

The kitchen has an Aga of course and a stoneware sink. The bathroom is an appealing vintage white suite which complements the style of property.

The accommodation currently comprises two impressive reception rooms and four bedrooms, all of which have high ceilings and enjoy views over the gardens.

The first floor can be accessed via two staircases and the master bedroom has an ante room, which could be converted into an en-suite or family shower room if preferred

The thatch was replaced in October 2010 and is believed to be in a good state of repair and it's also believed that the previous thatch lasted for a little over forty years.

Outside –Highly secluded in a private position surrounded by a mixture of formal and informal gardens. A small stream runs through the full length of the grounds featuring a number of small bridges over it and there is an ornamental pond and an established orchard with fruit trees.

There is a hidden garden enclosed by trees and hedging and here, as are elsewhere in the garden, are wooden outbuildings and wired enclosures currently being used as aviaries.

A detached garage with outside WC and Utility room stands to one side of the house and a group of horse chestnut trees provide shade in the Summer to the formal front lawns.

The gardens could continue to be enjoyed as they are or could alternatively provide a number of small paddocks if preferred.

Planning Permission - Planning permission has recently been granted for an 'extension' to the main dwelling, which would provide a separate one and a half storeys high complementary barn style building, with a frame-less glass link to the main house and large glazed barn doors, all of which could provide an impressive and befitting addition to the main house. The addition would provide a stunning galleried live-in kitchen with a new principal bedroom suite over. One of our pictures shows how the property could look with the new addition using a CGI image. The permission also allows for the erection of a triple bay carport to the side of the main drive.

Location - Drayton Beauchamp is situated close to Tring with its mainline station to London , which is a little over two miles away. There is a parish church, the Grand Union Canal and also the Wilstone Reservoir nearby, via a short walk from the rear of the property, which is considered one of the best bird watching spots in southern England together with good fishing. The property falls within the Buckinghamshire education catchment for the grammar schools and is a couple of miles away from Tring/Aston Clinton junction of the A41 for easy access to the M25. Wendover is close too, again with a mainline station to Marylebone and its twice weekly market.

Directions – From the Tring turn off on the A41, at the roundabout take the third exit (signposted Drayton Beauchamp). Follow the lane past Church Lane on your left hand side and into the village. The entrance to the Dower House is very discretely situated on the right hand side and is directly opposite Setherwood Cottage.

Excerpt from British Listed Buildings website: 'Said to date from 1620's, built as the dower house to the local manor, held by the Cheyne family from C14 to 1722. It is a well-documented example of a house of this scale. It followed the vernacular tradition but was sufficiently advanced to have a symmetrical entrance front. The interior features are particularly fine, and intact, notably the main stair. It is rare to find a house of this type retaining so much of its original fittings and finishes'.

AGENTS NOTE: One of the pictures features a digital representation of the approved addition which is merely shown as a guide to how the whole could look if the approved planning is implemented. 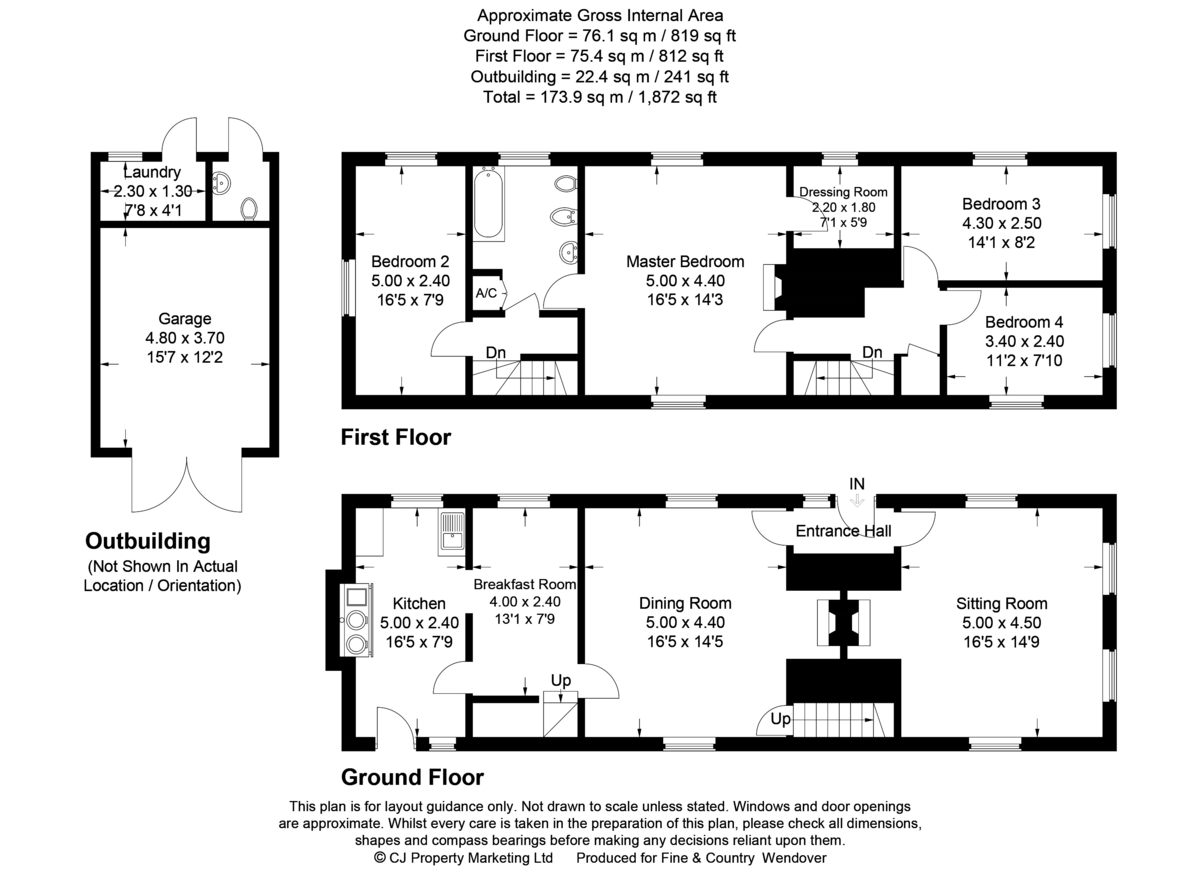 We still carry out virtual viewings and valuations.
Discover more